Unlock the Potential of Your Modbus® Transmitters 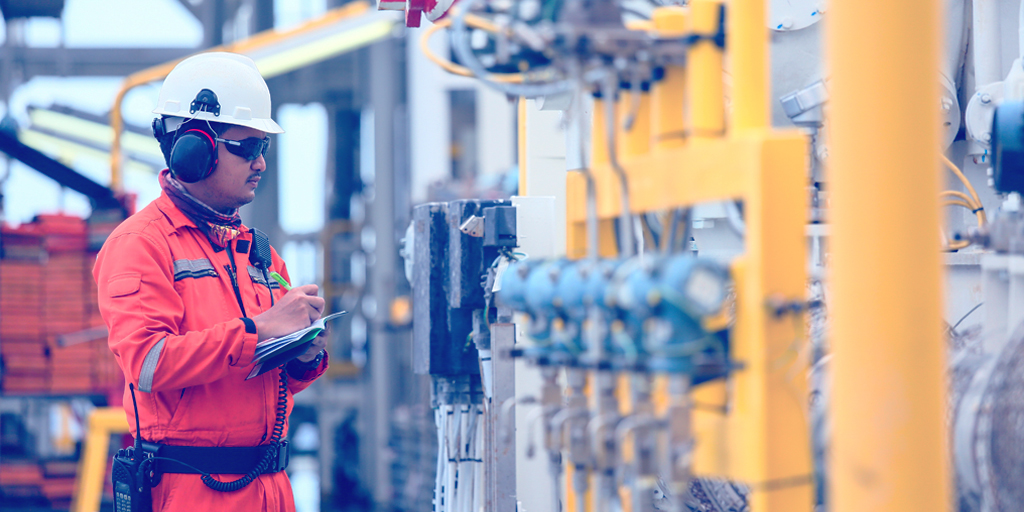 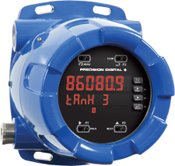 New Modbus scanners and displays, for safe and hazardous areas, are making it easier to get the information from the Modbus transmitter to operators in easy and convenient ways. Digital panel indicators and explosion-proof field units allow operators to see the information wherever it is needed with no complex computer programs required. Precision Digital's ProVu and ProtEX-MAX Series Super Snoopers (www.predig.com/Modbus) are good examples of this kind of display.

This article will discuss what Modbus communications is, and discuss the advantages of using Modbus scanner displays for local and remote display of process information from Modbus transmitters.

Modbus and How to Use It

Modbus.org defines Modbus as follows: "MODBUS is an application-layer messaging protocol... It provides client/server communication between devices connected on different types of buses or networks."

To better explain what Modbus is, it is best to look at a specific example, such as what Modbus does in a process measurement system using Modbus slave transmitters and Modbus master scanners, PLCs, or computer systems.

Modbus is a way for two devices to communicate digitally. Basically, Modbus allows multiple Modbus devices to share information digitally over a serial bus. For Modbus transmitters and scanner displays in the process industry, this bus is usually RS-485. This means that as long as the serial communications parameters are set up properly in the Modbus devices, a Modbus scanner can communicate to any number of Modbus transmitters on the RS-485 network.

Unlike a 4-20 mA loop, where each device needs an isolated signal loop, all the devices in a RS-485 network share the same three or five wires. All the devices are connected to the bus in parallel. Each device can be wired to the next, with just one set or wires going to the control panel. Three-wire RS-485 is called half-duplex, and five-wire RS-485 if full duplex. The Modbus devices with RS-485 will specify which mode they may be wired for. 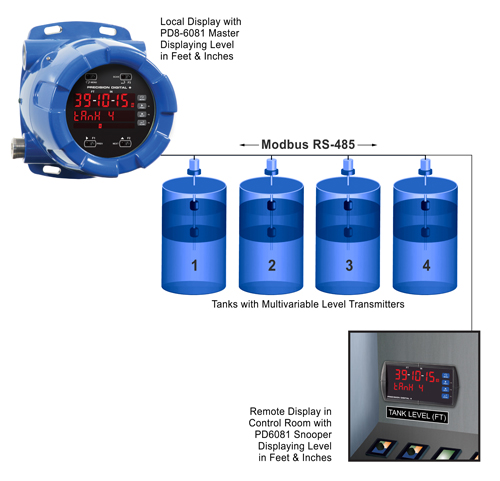 Modbus Network with 4 transmitters and 2 displays on one bus.
Click to Expand

Modbus is a means for two or more devices, such as transmitters, Modbus scanners, digital panel meters, PLCs, and more, to communicate digitally across various types of networks. While RS-485 is very common in the process industry, other networks such as Ethernet, RS-232, or even USB can be used for Modbus communications in some applications.

The Advantages of a Modbus Process Measurement System

Modbus communications can have a major impact on your industrial process. Assuming some (preferably all) the devices in your application are Modbus enabled; the advantages of using this serial communications are numerous. Two common advantages are the ability to easily use multivariable transmitters and to increase accuracy with a digital measurement and display system.

Multivariable level transmitters are becoming more commonly available and more popular. These devices are capable of measuring multiple process variables. One common application is tanks with oil and water. The transmitter can sense the level, interface of the two liquids, and the average temperature in the tank. The most accurate and most convenient way to read this information is with a serial communications option, such as Modbus.

A Modbus scanner can display one or more of these variables with just a few serial communication wires. Precision Digital’s 1/8 DIN panel indicator the PD6081 Super Snooper for example, can request up to sixteen process variables and display each on a two-line display showing a custom unit and tag for easy identification. The feet and inches formatted top display of the PD6081 or PD6089 can show the level and interface using actual feet and inches, including fractions of an inch (http://www.predig.com/PD6080). This would require three wires for RS-485, wired in parallel to each transmitter and the PD6081. In contrast, using traditional analog outputs and digital panel meters would require three isolated 4-20 mA signal loops with three isolated power supplies for each transmitter. Many multivariable transmitters will not even offer the option of proving each of these variables on a 4-20 mA output, and will instead only output the level information, or a selection of one of the available variables.

The reading of a digital value is also more accurate, as there is no analog signal inaccuracy or temperature drift in a Modbus system. The reading on the display is exactly what the transmitter is detecting.

This enhanced accuracy also benefits systems for flow rate and total. From industrial batching to custody transfer, accurate flow rates and totals are critical in oil and gas transport. Every analog signal used in a system adds to the system inaccuracy. Several very accurate meters, transmitters, and displays can combine their error to make a measureable inaccuracy in the system as a whole. The more parts of this system that use exact flow and total values transmitted by serial communications, the more accurate the system as a whole.

These two applications; mixed oil and water tank gauging and precise oil and gas flow measurement, are just two general examples of how almost any system can benefit from the using Modbus serial communications available in many process transmitters and an easy to understand Modbus scanner.

Other advantages include the simplicity of adding more devices into the Modbus network vs. a traditional network of analog signals. Packet sniffers, such as the PD6080 Series Super Snoopers from Precision Digital can be added into a Modbus network anywhere on the bus. They will display any process variables being scanned by the Modbus master. A major advantage about adding additional local or remote displays such as these is that no new loops are required; just attach the scanner to the existing RS-485 wires. In addition, no programming changes are necessary in the existing Modbus network devices. Modbus communication allows the devices to share more data, more accurately, than with traditional process industry methods, such as 4-20 mA or 0-10 V signals.

To someone unfamiliar with Modbus and serial communications, the terms and tables can be overwhelming. It is important to remember that modern Modbus industrial devices are easier to setup than ever, and are designed to be used by instrumentation technicians, not just computer programmers and electrical engineers.

Many of the transmitters already installed may have Modbus capabilities that are being ignored. Given the many advantages of these Modbus transmitters, it is worth using a Modbus scanner to harness the capabilities already present in these devices. Don’t settle for a less useful display and monitoring system just because the idea of Modbus is intimidating. There is plenty of resources and assistance available to help you unlock your transmitter’s potential.