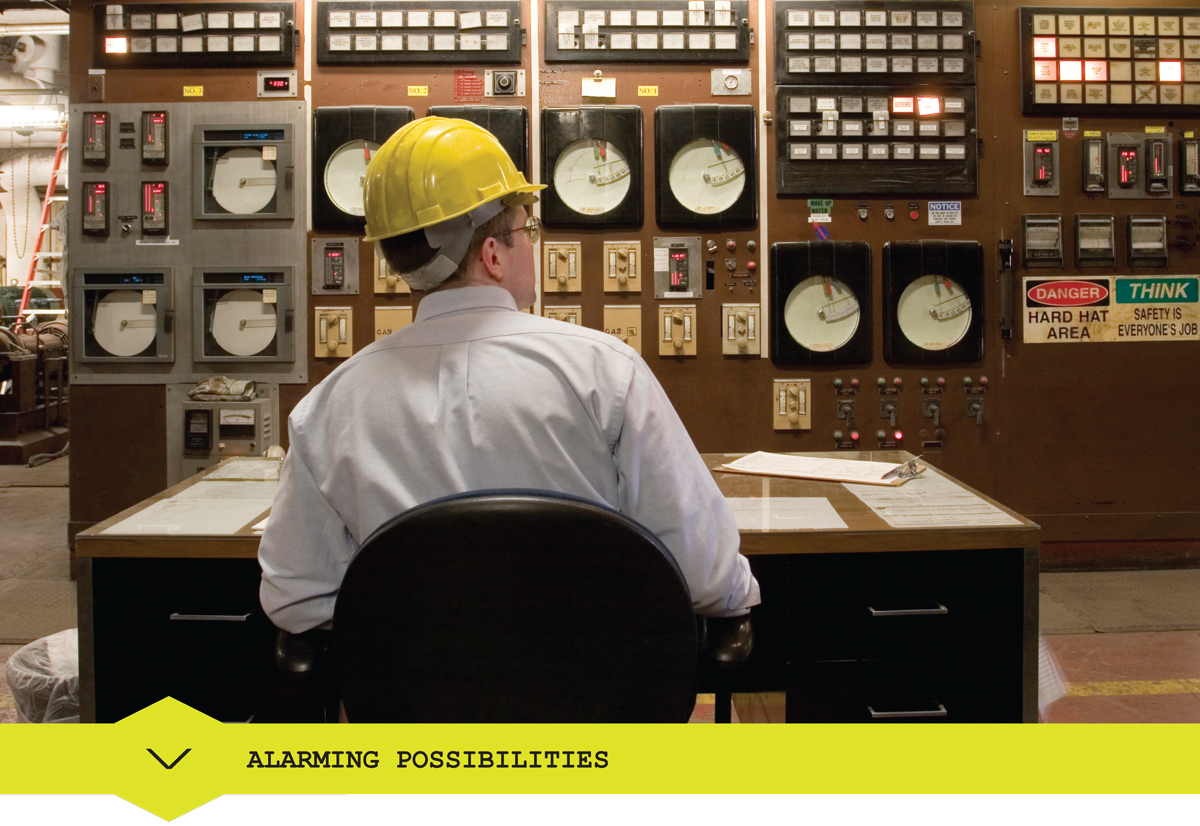 ISA Alarm Sequencing In A Nutshell

Alarms are a necessary part of the process control industry. Unintended faults in automation equipment are inevitable and must be communicated to operators clearly in order to avoid dangerous conditions.

The ideal industrial facility is one in which all process variables remain consistently within normal operating parameters. Such facilities are few and far between, however, so it is necessary that personnel are quickly and effectively notified of abnormal process conditions so that they may be dealt with accordingly. In industrial facilities where there are a multitude of process variables at play, such as automated manufacturing plants, waste water treatment facilities, and the oil and natural gas industries, implementing a successful alarm indication protocol can quickly become frustratingly complex.

Because of the amount of alarms required to monitor all relevant process variables in modern industrial facilities, "an important … component of safety system design is alarm rationalization and alarm management."1 It may be the case that in order for an operator to return one process variable to normal, another related variable might need to temporarily go into an abnormal state, triggering the alarm and flashing hazard lights for the system again. Variables that routinely go abnormal only briefly can trigger alarms excessively and do more to annoy operators than to alert them of potentially troublesome process conditions. An excess of alarms and incorrect alarm sequencing can lead to general confusion about alarms' meaning and a "boy who cried wolf" mentality about alarms in the facility.

Alarms can be communicated to operators via a variety of means. Some process control devices include built in alarm lights or audible sounds. These can allow limited alarming for small numbers of alarm points, but can quickly become overwhelming (or underwhelming) when a large number of variables are introduced. Software solutions can display alarm conditions on an operator's computer screen and allow for remote acknowledgment of the alarm state. These, however, have led to a decline in the "recognition of and response to alarm conditions" because, "on computer screens, [alarms] are not very visible and can go unnoticed."2

Annunciators are discrete devices that are specifically designed to make operators aware of abnormal operating conditions in an industrial facility through the use of lights and sounds. The lights can be anything from internal LEDs to large external flashing hazard lights and the sound can be generated from a horn, buzzer, or bell. These separate hardware alarming units are typically used "in installations where First Out Operation Basic Sequence Number Option Number(s) F2 M -1 simplicity is desired or where separation from the basic process control system is required for safety reasons."3 The use of an independent alarm system can put more emphasis on the alarm condition and potentially lead to a more active alarm response. Annunciators can be programmed to manage large groups of process variable alarm points and administer alarm notification in a manner that suits the needs of the operator.

The ISA 18.1 standard, the standard that defines alarm sequencing, exists in order to "establish uniform annunciator terminology, sequence designations, and sequence presentation… to improve communications among those that specify, distribute, manufacture, or use annunciators."4 It's needed so that alarm systems are designed to meet the specific requirements of any number of industrial applications. It is therefore necessary to first understand the designations defined by the ISA standard before being able to determine what alarming sequence is best for a specific process control system. Each alarm sequence in the ISA 18.1 standard is given a unique identifier which can be broken down into three parts:

Figure 1 shows an example of one such sequence.

The first part of the sequence is the first out operation. According to the ISA 18.1 standard, it "indicate[s] which one of a group of alarm points operated first."5 Essentially, this designates what will happen if another alarm in the alarm group triggers when the first alarm to sound is still in its alarm state. There are four first out operations.

Having no first out operation defined means that each subsequent alarm will behave identically to the initial alarm. If the annunciator is programmed to sound a horn and flash lights at any given alarm point until the process variable returns to a normal state, then that is exactly what the annunciator will do regardless of if there is already an active alarm state.

F2 is similar, except that it bypasses the audible and visual notifications without acknowledging the new alarms.

The second part of the sequence is the basic sequence letter which determines the rudimentary alarm functionality. There are three of these: A (automatic reset), M (manual reset), and R (ringback).6

Automatic reset returns the sequence to the normal state automatically after the acknowledge button is pushed and the process condition has returned to a normal state.

Manual reset will only return the sequence to the normal state after pressing the acknowledge button, returning the process condition to normal, and pressing the reset button.

Ringback behaves similarly to manual reset except that it also provides distinctive visual and audible indications when the process condition returns to a normal state. This mode requires an annunciator that is equipped to provide these unique indication modes in order to work.

In order to provide as much flexibility as possible, the ISA 18.1 standard defines option numbers that can be affixed to the sequence designation. There are fourteen such option numbers defined as part of the standard that define everything from the use of alarm silence buttons, whether or not to sound an audible alarm, and even alarm lamp test functionality.7

Some examples of options available are:

-1 (Silence Pushbutton): A separate pushbutton is added to allow silencing the alarm audible device without affecting the visual display.

-3 (First Out Reset Interlock): An interlock is added to require operation of the acknowledge pushbutton before first out alarms can be reset by the first out reset pushbutton.

-6 (No Audible): The audible device is disabled.

-7 (Automatic Alarm Silence): A time delay device is added to silence the alarm audible device after a set time without affecting the visual displays. 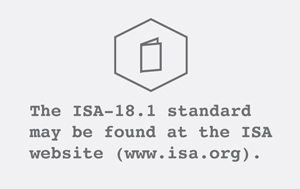 The ISA 18.1 standard enables manufacturers, installers, and operators to communicate alarm planning in a uniform manner. Understanding the meaning behind the numbers and letters that make up a sequence can allow one to think logically about what sequence would be best utilized in a given situation. The following scenarios illustrate when different sequences might be utilized to meet the needs of the application.

It is often necessary to measure the level of some liquid in a tank. In situations such as this, a buoyancy level switch can be wired to an annunciator. In a tank that is five and a half feet tall, this switch, which is open when the tank has less than five feet of liquid and closed when the liquid exceeds this amount, can use an annunciator with sequence A-1 to indicate a high level alarm. When the level exceeds five feet and the level switch closes, the annunciator will sound its horn and flash its light. The operator can press a button to silence the audible alarm so that the issue can be addressed without added distraction. Once the alarm is acknowledged and the liquid in the tank returns to below five feet, opening the level switch, the alarm sequence returns to its normal state and the annunciator light turns off.

Monitoring the temperature and pressure in a steam boiler being fired by natural gas is essential to ensuring the safety of nearby personnel and property. A pressure buildup could easily lead to an explosion. Separate sensors are used to measure the temperature and the pressure, so they would be represented by different channels on an annunciator alarm group. These variables are, however, interconnected, as the increase in temperature will lead to an increase in pressure and vice versa. In many cases, for troubleshooting purposes the most important thing an operator wants to know is whether the high temperature or high pressure occurred first so sequence F2A would be the best choice.

Clean rooms, such as computer rooms and hospital isolation rooms, as well as asbestos abatement projects (just to name a few instances) require differential pressure in order to keep zones of air separated from one another. The pressure levels of these zones should be constantly monitored as pressure equilibrium would lead to cross-contamination of other zones. In the case of asbestos abatement, this could lead to heavy fines levied by the EPA. Annunciators monitoring differential pressure in cases such as this might use the sequence F1R-3. This sequence would only show first out indication, limiting the alarming to the origin of pressure destabilization rather than sounding for surrounding areas into which air could be escaping, so that operators know in which area to concentrate their containment efforts. It also incorporates a ringback, announcing when the differential pressure has returned to acceptable levels. Lastly, the -3 shows that this sequence incorporates a first out reset interlock, ensuring that the alarm remains active for the original room only until the acknowledge button is pressed.

Alarms are a necessary part of the process control industry. Unintended faults in automation equipment are inevitable and must be communicated to operators clearly in order to avoid the potentially troublesome or hazardous results of neglected abnormal process conditions. Alarms can be managed using basic alarming functions included in some process control devices, software based alarming applications, or dedicated hardware annunciators. The ISA 18.1 standard is a means with which to uniformly define

alarm sequencing logic for manufacturers, installers, and operators of process control equipment. This standard allows for the simple communication, and therefore the logical research, planning, and installation of alarm sequencing. Understanding what the numbers and letters of an ISA sequence mean, and the available alarm management options defined under the ISA standard, can help to alleviate the confusion and frustration of process control alarm indication in industrial environments.